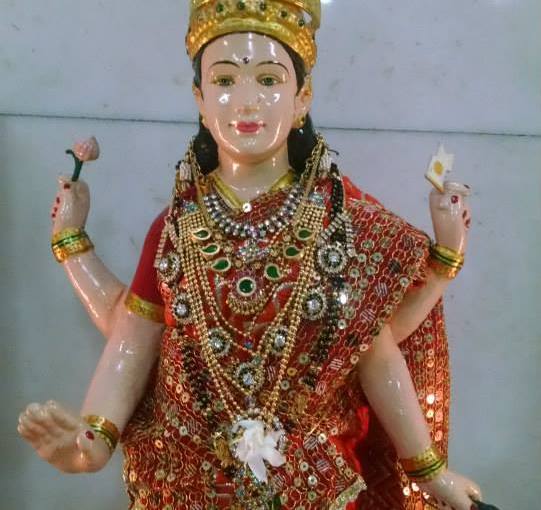 Those that meditate upon her with themselves as shampooing Her calves , soon become Her Love-stricken slaves. By this sort of meditation, shampooing the calves, which represent five arrows of Mother previously referred to, the devotees get mastery overs the powers of agitation, attraction, liquefication, and subjugation.
42) Gudhagulphaa गूढगुल्फा – With rounded ankles. ललिता सहस्रनाम स्तोत्र, नाम क्रमांक 42

Those are strong and round to hold the anklets, which by their tinkling sound and the dazzling light of the gems therein madden the ears and eyes of Her devotees.

The Founder’s most favourite part for meditation of Mother is an anklet. For devotional readers the devotional flight is suggested here.
43) Kurmaprishtha jayishnuprapadaanvitaa

As regard Mother’s Lotus Feet and Lotus Hands, there have been most sublime thoughts and emotions. Her one hand is described by Her best devotees (Naarada being one), as “ever uplifted, raised hand.”

Mother has always Her hand raised. Because, She is great giver Herself, and Her hand must therefore necessarily be above that of the one who receives. She is never the receiver, i.e., She will never be failing to be the highest donor in return of love and in fulfillment of devotees’ desires.

Regarding Her Lotus Feet, the best devotees have in full devotion love and sportivity said “Mother’s Lotus feet erred by their own shadow.” The interpretation of this most mysterious sentence, as explained to me, by Merciful Mother is this. As soon as devotee prostrates to Her, Mother is such an ocean in Her every atom that the bright ray from one of the nails of her Lotus Feet rushes into the heart of the devotee and transmutes all darkness and blackness in the heart to be light and whiteness, and every ray even after having done its work as a result of the climax of compassion to the devotees  does not return, lest after departure, the darkness and blackness should return and trouble the devotee and again make him miserable.

If this is the mercifulness of a single ray out of the most significant body portion as nail, who could imagine the quality and intensity and concentratedness of the mercifulness her heart?

Think of me anyway! I am blessed, although the wicked child, most graciously and mercifully blessed. These tears on getting this thought in torrent have washed out all my blackness and darkness. To-morrow I may be again full of blackness, but at this moment I am not. Mother be blessed. Mother bless all.

To continue, the Lotus Feet of Mother on seeing that the ray emanating from itself rush to the devotee’s heart and do not return, get a bit annoyed on not finding any of the rays returning and the Feet speak to themselves ‘Should these rays not have the discretion of apportioning out their beneficial blessing to the deservedness and worth of such devotee? Should they not return?

But while these Lotus Feet thus try to think and judge on the lines of requirements of strict justice, they see that millions of Devas and Asuras have been prostrating to them. On seeing their own shadow in the various-coloured jeweled crowns during the humblest prostration by the greatest of souls, their true nature of immeasurable compassion soon gets uppermost and these Lotus Feet all along go on committing the greatest error (?) Of liberating any soul whatsoever, without any consideration whatsoever of worth, deservedness or any other qualification.

Further, these Merciful Mother’s Lotus Feet, on finding that rays emanating from them do not return, and again finding their shadow in the crowns of Devas and Asuras, abruptly begin to think “To whom do we belong ? Which is our place ? Is it the Mother’s person or the crown of the greatest Devas and Asuras ? Or is it the heart of the humble devotees ?” “Do we belong to Mother? Devas or Asuras?” And they err(?), err most amiss(?), because out of their most compassionate nature very wrongly (?) they conclude that “Their real place of residence is in the heart of humblest devotees and they belong to the devotees.” Thus they err (?).

It need not be stated, to understand the above idea that the word “err” has been sarcastically used out of love to Mother.

No mysticism, no complexity, no external dependence, no scriptural requirement, no knowledge burden. Pure, simple and unadulterated thinking and feeling  the most sublime thoughts and emotions is enough to make one merge in divine ecstasy by the time one reaches the Lotus Feet.

Practise it. Find it. Preach it. The Simplified and Purified meditation of Mother’s Lotus Feet.

No other meditation is possible for an average Kali-creature of the Iron age.

Practise feeling, when you prostrate before Mother, that the most merciful rays from Her Lotus Feet are running to you, are washing out  all blackness in your heart and returning to the Mother with a potion of your consciousness which they drown ion the Mother’s Lotus Feet. Prostrating twice as above, practice feeling that after the third round, the blackness of your heart has disappeared.

As regards Mother’s Lotus Feet and Lotus Hands, there have been most sublime thoughts and emotions.Her one hand is described by Her best devotees ( Naarada being one ), as “ever uplifted, raised hand.”

Mother has always Her hand raised.Because, She is a great giver Herself, and Her Hand must therefore necessarily be above that of the one who receives. She is never the receiver,i.e., She will never be failing to be the highest donor in return of love and in fulfilment of the devotees desires.

Regarding Her Lotus Feet, the best devotees have in full devotional love and sportivity said,” Mother’s Lotus Feet err by their own shadow.”
45) Padadvaya prabhaajaala paraakrita saroruhaa

She wears Anklets mainly for two reasons. Firstly, She, being very sportive, so often likes to dance to the tune of her devotees, and secondly because She is anxious to relieve the anxiety of Her devotees in distress by giving them news of Her arrival from long distance when She is running down to help Her devotees. Her ankles are purposely strong as they prevent these anklets slipping off during speedy flights.

There are two gaits, one the elephant-gait and other the swan-gait for a damsel. The former results in the oscillations of the central body rightward and leftward.

In swan-gait there is an up and down movement of the feet and the neck, with face. The swan-gait is referred to because Mother’s devotee’s full attention is rivetted on the Lotus Feet.Besides a swan is beautiful not only in its gait but even by itself.There is an idea of tenderness associated with “swan”, that has no comparison.

Swan is further gifted with the natural capacity of separating  and sipping away milk though immensely adulterated with water.

Mother’s garments, ornaments, flowers, colours are all rosy and love-creating.