The modern youngster is sure to flare up with the question “Has the writer nothing else to say except Mother’s Mercy, Guru’s Grace, Love, Service, Devotion and Surrender, Universality and God as Mother ?”  Let me boldly say, that is the richest consolidated cream of all religious teachings. Ordinary worldly people have absolutely no idea, what a terrible whirlpool religious beliefs and disbeliefs, doubts and distractions, create for them that make religious life to be the only goal of their living. Innumerable questions taking years and years embarrass you and sometimes even haunt you. You are in suspense and groping in the dark craving for mental quietude with intellectual and spiritual illumination on the agitating religious problems.

” Is there any God? How is a man born? Why does one enjoy a kingdom and does another rot on a footpath? Are we responsible for our actions? Have we a free will or are we merely puppets? Do good or bad actions always give good or bad results? If not, where is the Divine Justice? Why partiality, inequality, and cruelty of Nature? Can we not escape reactions of our evils? Is there any life after death? Which is true, Rebirth or Doomsday? Which is better, action or inaction? Which is more elevating, Home or Hermitage? Is there any efficacy of prayers and any substantial intercession or Divine Aid by Deities? Is repentance and devotion enough to secure forgiveness? Is there any need of cautiousness at all in life, regarding virtue, character and good action, if devotion or Gyana is so very efficacious as to burn down all sins ?” Waves and waves, whirlpools and whirlpools!!

Anyone of these questions is more than enough, to keep a philosophical head constantly occupied practically for the whole life because there is no end of off-shoots, of sub-questions and no satisfactory answer which would satisfy anybody and everybody merely on the logical rational and intellectual plane. These are all matters of experiences, admitting of no convincing proofs.

In these circumstances, the Founder’s last conclusion in the most practical manner has been comprised in the Six Truths mentioned under Mai-ism. Man, with all his boasts of Science, with microscopes etc., has yet remained blind and his blindness is endless. He can do nothing and is nothing. Till now, Man has not been able to bring on our world, peace, happiness, diseaselessness or goodness. Evil has not been eradicated. How long to be deluded with deceptive promises of future better-being, after decades or centuries, which one is never to see?

Founder says  ” Take therefore the cash, and let the credit go”. Secure a good Guru-guide and secure the greatest Mercy of the Supreme Queen, the Owner, the Creator and the Disposer of the Universe. Live your life as straight as you can. Conquer and annihilate your mind or quieten it, to be saved from being dragged into a hundred whirlpools.  Love and Surrender with Service and Devotion spread around you with a universal outlook, is everything and all things about True One Religion. You have to practice, work out and live out these principles of Highest Truth in every moment of your life, as far as you can. There is no easy way to get an all-satisfying answer, to every question the she-monkey (mind) may raise; and there is no magic-wand-transformation. You have to die yourself for yourself. The conviction of ” This alone, not That, and not entangled overshadowed and obstructed by hundreds of That “- is the secret soul of the Mai-istic spiritual Sadhana and Siddhi (Success).

Love is not simply the dearest word of lovers and poets alone, but of devotees and true religionists, although that heavenly wonderful mystic word is whispered, only when Soul is in communion with Almighty, in the sound-tight silent temple of one’s Heart.

Extract from the book : MAI-ISM 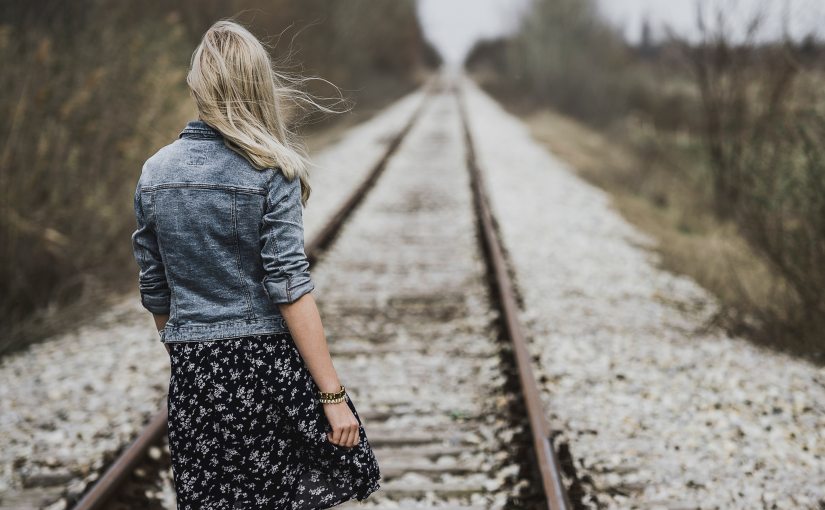 What is there finally, even in vice or virtue? richness or poverty, good treatment or bad treatment, justice or injustice, intelligence or dullness?? Of course, within reasonable limits and after Mother’s Mercy and Guru’s Grace?  Has any mother discarded her son because he is stingy, because he loses his head frequently or even because he goes a bit immoral? No. Her work is to improve him and not to gnash Her teeth, provided he has obediently lovingly and servingly surrendered himself to Her. He is to be chastened but not forsaken. That is Mother’s Love. He is to be punished, scolded, guided but protected, so long as he is Mother’s and continuous to be Mother’s. He shall never be thrown to the winds.

Mother’s compassion alone can save us.

When the Founder would be tired to the last point, Mother would explain the paradox thus.

And yet, know this, the secret of secrets:

Enjoyment and Happiness proceeds from Relinquishment, to the extent you throw away things of the world. ” Love alone is the Teacher of Relinquishment. Service concretises Love.

They become happy who love and serve Me and whom I love. The claim to be happy finally rests on Love and Service to Me and Mine, with devotion and self-surrender.

Neither people can change matters nor you. What is people’s highest self-control before Nature’s urge from within? And what can your highest effort do unless I move the keys of people’s hearts?

” And yet the paradoxical position that you are weeping about saves the world and is the keynote of the secret working. “It was true of everyone that was, is, and will be, dearest to Me.

There is no human working that permanently helps. It is only My Will. The usefulness of all working of people, or God’s dearest devotees proceeds from quite a distant irrelevant invisible thing.”

To repeat, it is this : ” Those who love and serve Me, My dearest and My children, will be saved”. “World as a whole will be run on the basis of its collective merit, but individuals will be saved”.

The rest is all Maya’s befooling of mankind, through delusions of authorship, ownership, actorship, etc., and misunderstandings through networks of causes and effects, distinctions and differences, mine and thine, etc.

” The Lover, The Server, and The Surrenderer to Me or Mine alone wins the highest victory of happiness.”

The rest is only a temporary mirage-like satisfaction and a passing talk, a word-forth, a speedy revolving of the motor-wheel raised above ground ; the meter would read miles but the motor stands where it has stood.

The Founder would with an electrification jump up from his seat of meditation and run to the Mother’s pedestal and lift Her picture and holding Her over his head, would say in highest jubilance ” Then, what else have I been doing and preaching? ?” His brains in full electric sparks would then cool down with an overpowering sleep.

He would again have the renewal of passion to continue Mother’s work in spite of failures. He would be happy and with his decision, say to himself “Failures are no failures, except in worldly eyes. Every effort itself, by virtue of its being with the purpose of serving Mother and Mother’s work, is a victory by itself and in itself.” 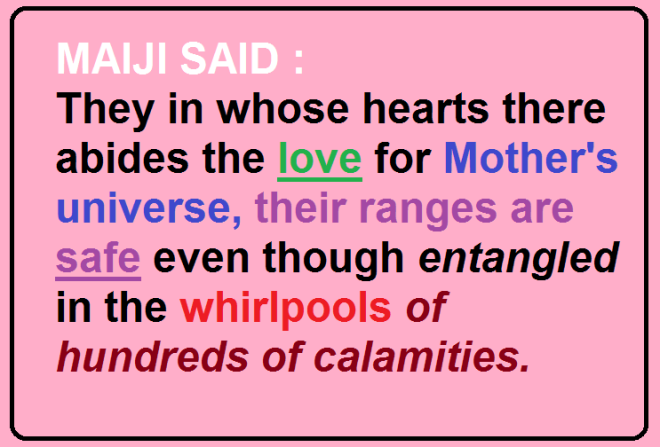